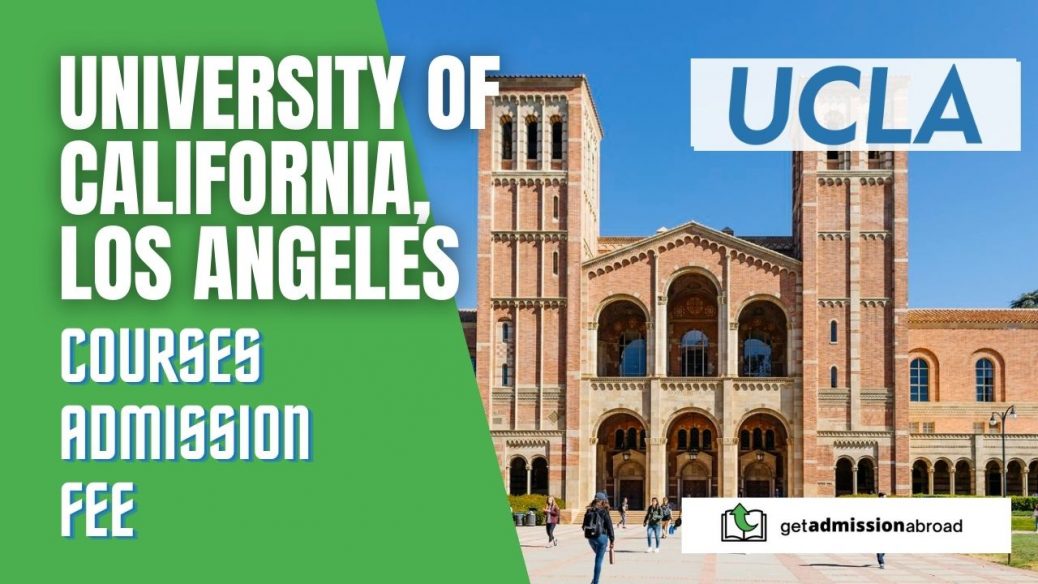 University of California Los Angeles provides opportunities for exploration, discovery, and learning– yet it’s a close community offering a sense of belonging. The campus is home to a world-renowned faculty that teaches in 230 undergraduate and graduate majors, with more than two dozen academic programmers, ranked among the top 20 in their disciplines. The faculty provides more than 5,000 courses per year, with two-thirds of undergraduate classes having fewer than 30 students per year.

For many newcomers, the undergraduate experience begins with a year-long Cluster Course, a team-taught exploration of a challenging interdisciplinary theme.

In addition, 200 Fiat Lux seminars are offered, taught by senior faculty in small-group settings where freshmen have priority enrolment. Undergraduate research projects are available as early as the New Year and more than half of UCLA students graduate with experience in the fields of humanities, social sciences or STEM (science, technology, engineering and mathematics).

UCLA frequently allows students to study abroad–more than 2,400 every year–with more than 275 courses in 39 states.

For more activities outside the school, UCLA provides 1,000 student organizations enough opportunities for students to explore passions and ventures with fellow students. UCLA boasts of top research centers and institutes, the top-performing arts program, the elite Division-I athletic program and the pre-eminent hospital in the Western United States.

INTERNATIONAL RANKINGS: University of California, Los Angeles (UCLA) is ranked 9th in the Times Higher Education World Reputation Rankings (2018). The reputation survey was completed by more than 10,000 senior academics from 138 countries. Times Higher Education has a unique World University ranking. In the latest edition (2018–19), UCLA ranked 17th in the world and 2nd among U.S. public universities. UCLA places 11th in the Academic Ranking of World Universities by Shanghai Rating Consultancy, based on academic reviews and references, as well as the number of students and professors who have won major prizes.

GRADUATE & DOCTORAL PROGRAM RANKINGS: In 2010 (its most recent ranking), the National Research Council ranked a number for UCLA graduate and doctoral research programs in the highest ranking. Of the 59 UCLA programs evaluated, 40 were put in the scope that stretched to the top 10.

Fee Structure of the University of California Los Angeles

2019-2020 ESTIMATED UNDERGRADUATE STUDENT BUDGET School fees, fees and charges shown below are estimates based on currently approved numbers. The statistics may not be final. Actual schooling, fees and expenses are subject to change by the Regents of the University of California and may be affected by a reduction in state funding.

Here are some courses available in the Undergraduate category:

Here are some courses available in the Graduate category

Required Documents for Admission in University of California, Los Angeles

The academic records must have indicate the dates of enrollment. The subjects or courses taken together with credit or time units allocated to every subject and, if rank is determined, rank in the total class or group. Records must also include a complete description of the grading scale of the institution or of any other standard of assessment. Maximum and minimal points and the measures between them shall be shown.

Unless the institution regularly publishes academic records and diplomas in English, the records in their original language must be submitted in an authorized, complete and accurate English translation.

Applicants that are informed of their formal enrollment: proof of conferral of all diplomas, degrees or academic (Study) titles must be submitted to central office. These proof may be in the form of official certified versions of the original certificate or of entries in the official records or in the official statements of the issuing bodies. In all cases, the declaration must include the exact, original title of the degree and the date of its formal conferral (month and year).

Certificates of completion of the required courses or of graduation exams can not be accepted as evidence that the degree has been issued. Degree diplomas showing the month and year of the award should be issued before the beginning of the period applied for.

Students applying for exams in countries where the’ Excellent, Really Ok, Good, Fail ‘ grades are issued must submit an academic record with at least a’ Very Good’ general score.

International students having three-year ordinary degrees or possessing specialist diplomas in accounting, trade, librarianship, social work, physical education, health education and so on, or four-year degrees, diplomas or higher qualifications from advanced academics, vocational or post-secondary schools, are not qualified for graduate entry.

Applicants that are members of the professional associations such as Chartered Accountants ‘ Institutes or Chartered Secretaries ‘ Institutes and Administrators are not eligible for graduation unless they also hold recognized university degrees or degrees.

All fresher applicants are expected to perform the following tests:

For freshmen In order to have your test scores accessible in time for our examination, for assessments must be carried out by December of your senior year. All ratings should be sent directly to the UCLA Admission Office through the screening service. The following tests are expected to be carried out by the applicants:

The environment of the college

In 1929, the current UCLA campus had four buildings: Royce Hall and Haines Hall on the north, and Powell Library and Kinsey Hall (now renamed Renee and David Kaplan Hall) on the south. The Janss Steps was the initial 87-step staircase to the college that connected to the quad of these four houses. Currently, the college consists of 163 structures occupying 419 acres (1.7 km2) in the western part of Los Angeles, north of Westwood shopping district and just south of Sunset Boulevard. As far as acreage is concerned, it is the second-smallest of the ten UC campuses. The campus is about 1 mile east of theI-405 San Diego Freeway.

The campus is located in the residential area of Westwood and borders Bel-Air to the north, Beverly Hills to the east and Brentwood to the west. The campus is informally split into North Campus and South Campus, both on the eastern half of the university’s ground. North Campus is the main campus core; the structures are more conventional in style and are covered in imported Italian stone. North Campus is host to music, education, social sciences, government, culture and business programs and centers on the ficus and sycamore-lined Dickson Court, also known as the “Sunken Garden.”

Wrestling and judo will be played at the Pauley Pavilion during the 2028 Summer Olympics. The building will also house the Olympic Village for the Olympic and Paralympic Games.

What is the entrance gateway to the University of California Los Angeles?

To be considered a freshman for admission to UCLA, you must complete high school with a higher academic record and be on track to complete your high school diploma. Applicants are required to have met the following minimum requirements:

We recognize that the subject criteria of UCLA may be challenging for some students to follow due to differences in school curricula. All requests for admission are evaluated within the scope of the courses available to them; if a particular topic is not eligible, we must accept the request without it. There is no specific learning course that we want all graduates to pursue, but the best candidates take the most comprehensive high school curriculum open to them. If you have any questions about the subject requirements, please feel free to contact UCLA Undergraduate Admission.

Advantages of the University of California Los Angeles

When I decided that I was going to travel overseas for my new year, it was just a matter of deciding which course I wanted to go on and where I wanted to go. It was my hope to go to Paris. My sister and I have always spoken of moving to the United Kingdom and have been at the top of our list. It wasn’t until my sophomore year that I decided to study directly with Professor Makdisi in the Romanticism Program in London. Ever since I took English 119 in the Winter Quarter at UCLA with Professor Makdisi, I decided that I wanted to explore and draw on what I learned in his class about the City of London. While my sophomore London class stood in Haines and heard about the City of London, I recall something that Professor Makdisi said as he gave us a first-person perspective as if you were on an Omnibus.

He clarified that although he was able to show us what London looks like on the monitor, it was a completely different experience in person. The markets, the area, the nightlife were all aspects about London that were indescribable and had to be experienced. And he was right. Everything was different. From the streets,  the city life & atmosphere,  it was completely different than the United States. Something you couldn’t teach from a textbook, but something you had to explore personally. With people from the University of California, Los Angeles (UCLA), I thought what better way to explore an unknown city. Such an opportunity is indescribable, and I urge anyone to take advantage of it!

UCLA provides accommodation for more than 10,000 students and 2,900 alumni. EOLBREAK The bulk of undergraduate students are located in 14 residential buildings on the west side of the campus, dubbed “The Hill.” Students can live in different rates and confidentiality in rooms, plazas, condos, or college studios. Accommodation plans also provide students with access to dining facilities, ranked among the best in the United States by the Princeton Review. Covel Commons, Rieber Court, Carnesale Commons and De Neve Plaza are housed in dining halls.A restaurant called The Feast at Rieber opened for students in winter 2012. Bruin Plate, situated in the Carnesale Commons (commonly known as Sproul Plaza) is the newest dining hall (as of Winter Quarter 2014). Bruin Coffee, Rendezvous, Hedrick’s The Test, and Cafe 1919 are among the urban cafes. Now, UCLA gives the incoming freshmen three years of secured accommodation and one year for incoming transfer students.Students can choose from four types of housing: residential halls, deluxe residential halls, residential plazas, and residential suites. Training quarters, basketball courts, tennis courts, and three swimming pools are located on the slope.

Graduate students are located in one of the five apartment complexes. Weyburn Terrace is located just southwest of the Westwood Village campus. The other four are approximately five miles south of UCLA in Palms and Mar Vista. They also vary in terms of pricing and privacy. Approximately 400 students live in the University Cooperative Housing Association, located two blocks away from the campus. Students who are engaged in Greek life can also live in Greek housing while at UCLA. Sorority houses are located east of the campus and fraternity houses are located west of the campus. Students usually live with more than 50 students in Greek housing.

Top Universities you should check out:

Here are some other universities that you can check out.

©2022 Get Admission Abroad. All rights reserved.